This section has been added to the site in response to questions from prospective buyers who aren’t sure of the terminology used or who are interested in some of the more technical aspects of straight razors.

The picture and video below provide an introduction to the various parts of a straight razor. 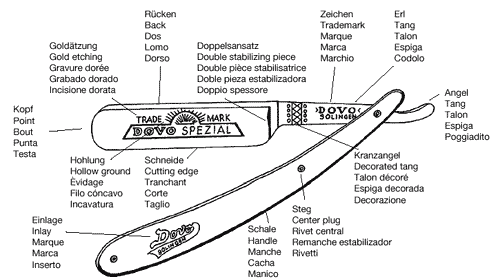 The ‘size’ of a blade is usually measured in multiples of 1/8 of an inch and is the distance from the SPINE to the EDGE (see above). Sizes range commonly from 4/8 (four eighths of an inch) to 8/8 (one full inch) though extremely narrow blades of 2/8 and very large examples up to 12/8 (one and a half inches) and beyond may be found. Just to confuse the issue, sizes of 9/16 and 11/16 do crop up regularly! We currently stock razors from 2/8 to 7/8 in size.

In relation to blade points it should be notes that these have different names in different countries. However, the three most common are:

Round points are generally favoured in Europe generally over other point types.

Square points are also called spike points (especially in the USA) and are less favoured in Europe.

Dreadnought points are also called notch points although strictly speaking this is not true - a Dreadnought point may be seen as above (it resembles the prow of a WW1 ‘dreadnought’ battleship) and also with a semi-circular ‘Sheffield notch’ cut out of the blade point. This was largely a cosmetic effect.

Several other point styles are made, including oblique and Spanish. However, the three above are most common, with the dreadnought generally being found on older razors (say pre-1900), though we do stock 6/8 and 7/8 new ‘dreadnought’ blades from Thiers-Issard.

Another thing to remember about blades is their overall shape. The basic shapes are -

Straight (or parallel) - the most common shape in hollow ground razors. This means that the spine and edge are straight and run parallel to each other, as in the square point blade shown above.

Swept spine - sometimes seen in larger wedge razors, this means that the edge is straight but the spine is curved concavely, as in the dreadnought blade above.

Swept edge - sometimes known as a ‘smiling’ edge, especially in the USA, this is the reverse of the swept spine. In this layout the spine is straight and the edge curved convexly, as in the dreadnought blade above.

Fully swept - as can be guessed, this blade shape means that both spine and edge are curved along the same radius. This is more common in wedge razors of the later 19th Century. The dreadnought blade above is in fact a fully swept blade. The amount of sweep can vary from a gentle sweep to a scimitar-like curve as in the ‘parabola’ style blades.

NOSE - the part of the blade where SPINE meets POINT.

POINT - generally, the whole end of the blade, which can be of various shapes.

TIP - the part of the blade where EDGE meets POINT.

SPINE - the blunt ‘back’ of the blade from NOSE to TANG.

EDGE - the sharp section of the blade between TIP and HEEL.

HEEL - the section of blade that sweeps up to meet the TANG.

TANG - the section of the razor that is held during shaving. Generally marked with the maker’s name or trademarks. May have JIMPS cut into the upper and lower surfaces.

JIMPS - also known as ‘fluttings’, are serrated sections above and below the TANG that aid grip during shaving. They may be above, below, above and below, or not present at all depending on the razor’s make and age.

TRIGGER - also known as the ‘little tang’ or ‘monkey tail’. This aids opening the razor and also provides a positive location for the third finger whilst shaving.

PIVOT PIN - Of brass or steel, this is the pivot point for the blade.

HEEL PIN - this is the pin that holds the SCALES fixed together at their bottom end. There may also be a CENTRAL PIN midway between the two, sometimes called a ‘tang pin’.

SCALES - also known as ‘handles’. These are the two pieces of plastic, bone, Bakelite, ivory or other material that guard the blade when closed and can vary from plain black to highly worked and decorated. All perform the same function, however.

HONE WEAR LINE - the ‘flat’ on the spine shoulder caused by the abrasion of the hone when the blade has been re-honed. I generally define hone wear thus:

Pronounced - the hone wear line is over 1/8” wide

Full-wedge blades do not always fall under this system due to their very flat sides - hone wear often seems far worse than it actually is - individual descriptions will then apply.

Grinds and the Henckels Scale

Grind is defined as the transactional geometry of a blade. Blades can be straight grind with a wedge shape, hollow grind with biconcave sides, or transitional grinds. Full hollow grind blades have a belly or ridge which gives the thin metal torsional resistance. When the blade rests on a flat surface, the sides of a straight grind blade touch the surface. The belly never reaches the surface.

The above statement is the best answer I can give to the often asked question “what’s the difference between a wedge blade and a hollow-ground one?”. The reality of the matter is that the majority of blades are (nowadays) hollow-ground. Full wedge blades are usually only found on razors made before about 1880. A ¼ or ½ hollow grind will generally have one BLADE STABILISER, full hollow ground blades usually have two.

Historically there were many varying degrees of grind, from full wedge to extreme hollow-ground. The Henckels scale (below) shows the 16 different grades of grind available in their 1914 catalogue, 1 being full-wedge and 16 extreme hollow. 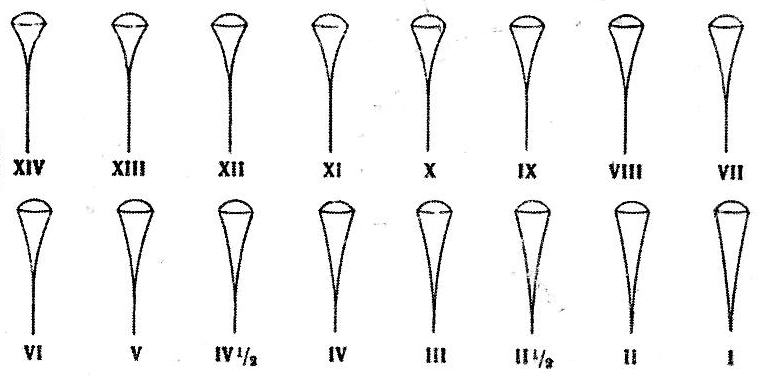 When you multiply the above degrees of grind by the point shape and depth of blade, it adds up to the fact that Henckels - just one (albeit major) razor maker was in that year offering some 480 different razor models in their production schedule - and that’s just counting the three main blade point shapes mentioned above!

I do hope that this page has answered most of your questions regarding the jargon and specifications that relate to straight razors. As always, there are exceptions - (‘Bismarck’ style shoulderless blades for example!) but this page should cover the main points. I don’t pretend that everyone will agree with my terminology but I use it as my standard and keep to it wherever possible. Again, if you have any questions do drop me a line.

If you wish to access the Invisible Edge Downloads please register with us here.