The Iwasaki workshop is in Sanjyo, Niigata which is the traditional centre for steel in Japan. Originally established after the War by Mr Shegeyoschi Iwasaki and his father Kousuke Iwasaki. Production has now been handed over to Mr Mizuochi who continues in the same tradition to produce the highly rated Iwasaki razor. This Japanese razor is produced in very limited quantities and hence is much sought after. 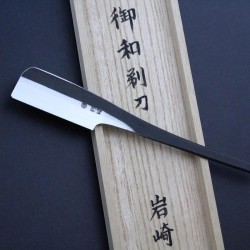